Ok, first things first: all the R code appearing in all 7/8 of my time-series post is available on GitHub in the repo ‘cool-time-series-stuff

It’s been a while since I last posted on my little time-series journey so I’ll recap:

1. I started with a conceptual problem: I have monthly data on a seasonal process from

2. In this post I tried to provide some background on important concepts and metrics in time-series analysis. This included a review of important properties of time-series data: stationarity, seasonality, and autocorrelation structure.

3. In a follow-up to #2 I tried to cover autocorrelation in a little more detail, including Breusch-Godfrey tests for serially correlated errors in time-series data.

4. I addressed seasonality here including my understanding of stochastic versus deterministic seasonality.

In this post I’m going to talk about (what I see at least) as a philosophical alternative to Markov Regime Switching Models: detecting structural breaks in seasonal data when the number and location of those breaks is unknown.

Since it’s been a while since my last time-series post I’m going to start with a fresh empirical set-up. This is a bit manufactured but I work with environmental data all-day, in my off hours I occasionally like to think about other stuff:

Suppose I have data on monthly vacation days taken by people in the San Francisco/San Jose area. From

this process is pretty seasonal and peaking around the traditional ‘high seasons’ for vacations (summer and Christmas). Now suppose that at time

the seasonal process was instantaneously altered by two events: i) the transition by tech employers to a time-off model where vacation time is unlimited and unquestioned and ii) the emergence of Air B&B which made quick, local get-a-ways an attractive vacation option.

Basically we have a process that went from being highly seasonal to one that is almost totally smoothed out.

In theory, since the transition probability between regimes is an estimable parameter, The Hamilton Filter (or any other Markov Regime Switching algorithm) can identify a single one-time break…the implication of such a process is that the maximum likelihood parameter estimate for the transition between regime 2 and regime 1 should approach 0 (once we switch from regime 1 to regime 2, we never switch back to regime 1). In practice, I found that the model had a hard time with processes like the one illustrated above where there was a single change from seasonal to non-seasonal.

To illustrate what I mean by “had a hard time with”, I ran through 10 iterations of a simple replication exercise:

Here is the code for that exercise (in practice I just ran this code block 10 different times):

and the two out of 10 replications that successfully solved for maximum likelihood parameters but that I determined did not correctly classify regimes looked something like this: 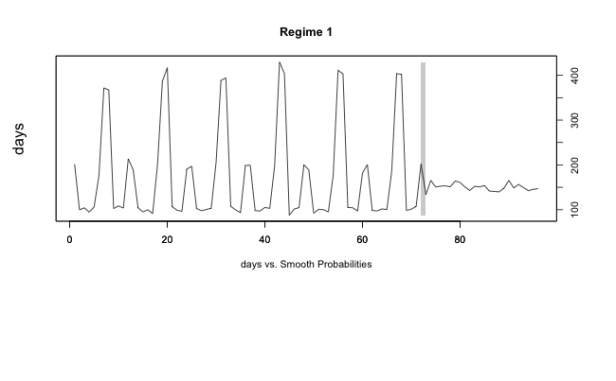 Time-series Review
At the risk of being pedantic I think this is good place to pause for a review of the overriding motivations for this foray into time-series:

The remainder of this post is organized as follows:

2. Some examples of how to implement the Bai and Perron (2003) approach with the R package strucchange

I waffled a little over whether to try and attempt a full formal treatment of this topic….I know math in WordPress can be a little tough on the eyes but, when it comes to models and data analysis, I usually find that I don’t really understand how something works until I can reproduce the math.

Most of you will probably be happy to know that I decided not to go full math-assault on this but rather to just review the key pieces of literature in the development of the topic.

Figuring out how many breaks a time-series has and where they are located evolved from the following seminal contributions:

In practice, the R package strucchange will take most of the tedious work out of testing and dating multiple unknown break points in a time-series.

The package allows one to use Andrew’s

or the CUSUM family of tests for determining structural breaks. The package will also use Bai and Perron’s (2003) algorithm to find optimal locations for multiple break points.

Here is how it work for our data: 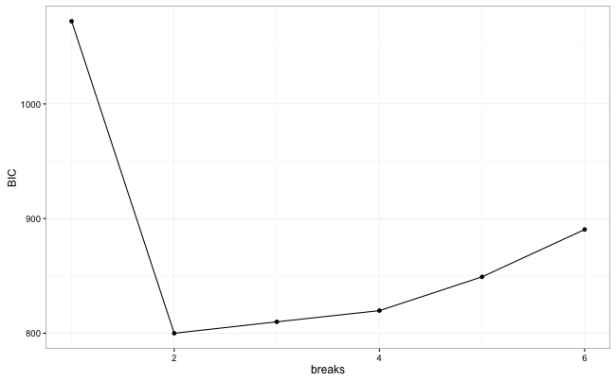 . I wanted to simulate some more complicated data with multiple breaks but it doesn’t look like I’m going to get around to that today….perhaps one of my army of readers will clone the GitHub repo and add some illustrations with more complex data?