This post deals with a really trivial case that I cooked up just to prove to myself it can be done.  We’ll run through it quicky-quicky then I’ll comment on why I think it might be useful in more complex situations.

First, a two line R script that creates a data frame and outputs that data frame to a .csv file:

We can run this script from the command line (‘terminal’ if, like me, you’re on a mac) pretty easy: 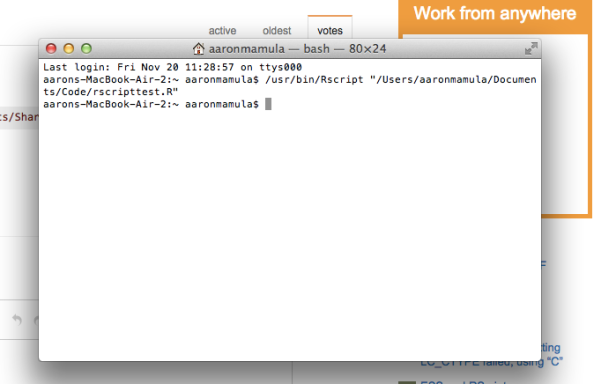 It is, apparently, just as easy to have python run this R script:

The only thing interesting to note from the screenshot above is that on the first invocation of ‘ls’ in the /Users/aaronmamula/Documents/Code directory is that there no file called ‘pyRtest.csv’ but after we run the R script using

we can see that the second ‘ls’ call tells us that the file ‘pyRtest.csv’ now exists in the directory. Cool, the R script ran and did what it was supposed to do.

Since the exercise above is pretty trivial in nature it’s probably worth commenting on why a Python-Spawns-R-Process might be cool for a data junkie. Here’s a use-case that’s not trivial (I haven’t figured out exactly how to leverage the Python-Spawns-R knowledge to do it yet, but it’s conceptually similar to the example above):

I’m engaged in an ongoing study of unconventional oil and gas exploration in California. The data are pretty complicated:

I have an R script (a really long one) that:

Here’s the thing: I can (and have) package up all the disparate data files into a .zip folder. Then I can send that folder and my R script to pretty much any R user who wants to use the data to either i) replicate my analysis or ii) estimate their own model for comparison with my analysis. This is fine for all the R users out there but unfortunately some of my colleagues still prefer STATA, MATLAB, or GAUSS for analysis. Although I’ve become increasingly inclined to say ‘tough shit’ to the R-haters, I haven’t given up on them completely. This Python-Spawns-R process is one way that I can give the STATA holdouts access to the exact data set I used in my analysis.

Also, and this is purely speculative, but I figure if I can do this I should be able to use Python to: i) call an R script that runs a model and collects the outputs of that model, ii) passes those outputs as inputs to a FORTRAN model I have, and iii) collects the output from the FORTRAN model and send it back to an R script for processing/plotting/data visualization/table construction for presentation of final output.

My Mac (OS 10.8) came pre-installed with Python 2.7 and all I have to do to access the interpreter is type ‘python’ at the command line….and they don’t really need to know Python, they just need to know this one line of Python.