I just finished writing a post breaking down some good, not so good, and downright dubious examples of public policy analysis I’ve seen recently in the scientific literature. I realized that, in the course of that post, I provided very little context on the types of empirical strategies that are often used in public policy analysis. Rather than go back and try to fit a quick primer on policy analysis methods into that, already crowded post, I thought I would try my hand at writing a few methods tutorials. I’m starting with a method that gets a lot of play in the type of policy analysis studies I like to read: Difference-in-Differences.

The classic motivating example for D-i-D analysis is here.

In the paper David Card and Alan Krueger evaluate the impact of a change in the minimum wage on employment. They use a sample of fast food restaurants (reasoning that if there is an employment effect to minimum wage changes it should certainly be visible among fast food firms, due to their heavy reliance on minimum wage labor) in New Jersey (a state that raised the minimum wage in April of 1992) and Pennsylvania (a neighboring state which did not experience a wage increase in April of 1992). In a nutshell, they found no discernible impact on fast food employment resulting from the increase in minimum wage. This study has become a bit controversial since, as you might imagine, some have used it to lobby for increases in state-wide minimum wages on the grounds that employment effects of such policies have been overstates. Conversely, others have attacked the study as flawed in attempts to counter the former groups lobbying efforts. I have no interest in weighing-in on the larger debate about minimum wages today. I’m just presenting this work as an example of public policy analysis that difference-in-differences can help inform.

Conceptual road-map
Suppose we are interested in the impact of a change in the minimum wage on employment. We could look at data from a state that changed their minimum wage at some time,

Basically, when we use Difference-in-Differences we are looking for a way to separate out the observed change that we can attribute specifically to the policy change..versus all the other shit that makes things like employment go up and down.

Let’s think about two comparisons just to illustrate these issues.

Illustration 1
We have data on 50 fast food restaurants in two states (A and B) over 4 years. Following year 3, state A implements a minimum wage increase but state B does not. 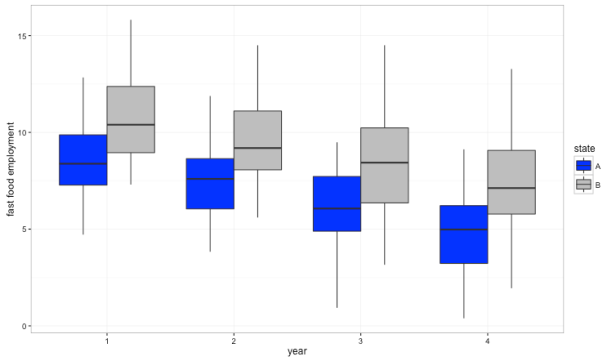 Illustration 2
Suppose we have data before and after the minimum wage change on employment by fast-food restaurants and some other industries that we don’t suspect would be affected by changes in the minimum wage. Suppose all our data is from the same state.

In the plot of totally made-up data above, the lines with colors corresponding to the colored points show mean employment in each industry.

Note that, although we did observe a decrease in employment in the fast food sector (the red line trending down) following the implementation of the minimum wage hike, the change appears consistent with the employment trends in broader economy.

Illustration 3
The two illustrations above were meant to drive home the point that assessing the impact of policy requires looking at relative changes. Illustrations 1 and 2 can kind of be thought of as ‘what might it look like if there were no change from the policy?”

We can contrast that with a ‘text book’ case of a policy induced shift, illustrated below.

In this case, State A implements a change in the minimum wage effective in year 3. State B does not. A foundational point with Difference-in-Difference analysis is that, if these two states are similar in most respects (such as neighboring states might be), then a good guess at what fast food employment would be in the absence of a change in the minimum wage can be constructed using fast food employment in the policy-unaffected state.

I think another illustration would be overkill here but it’s worth mentioning that, in addition to a level shift, we could think about a case where the trends (the slope of the two lines) were similar before the policy and completely divergent after the policy…think of two parallel lines before the policy that cross following the implementation of the policy.

Econometric Estimation of a DiD Model

Card and Krueger collected wage and employment data, along with other characteristics, of 410 fast food restaurants in NJ and PA at two points in time: first during the period Feb-March of 1992 (just before the minimum wage increase) and then again in Nov-Dec of 1992 (about 8 months after the wage increase). As discussed above, by comparing the treatment group (NJ, the state that enacted the wage increase) with the control (PA which, as a neighboring state, is presumed to be similar to NJ in many respects except it did not receive the treatment…i.e. there was no change in the minimum wage) we can isolate the marginal impact of the wage increase on fast food employment.

I downloaded the data used for this study here

First, let’s consider a model with a pretty simple additive structure. In our data we have:

With this set-up we could write the following model:

In this model, the change in expected value of employment in the affected area from the first to the second period is:

And the change in expected value of employment in the policy unaffected state is,

showing that the DiD estimator (

We can compare the means in the data above to Table 2 from Card and Krueger (1994) and confirm that we are working with the same data.

In the final line above we estimate the model. Note that the estimated coefficient on the interaction of state*time is 2.754 and is marginally significant. This matches the change in mean FTE employment reported in Card and Krueger’s Table 3, row 3.

Two important points to mention before closing this out: